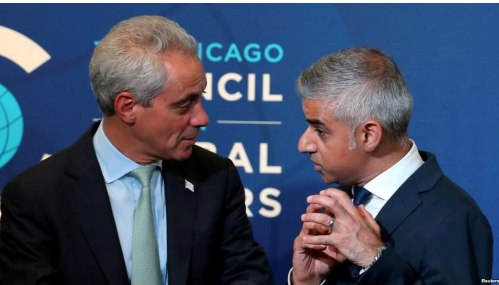 Kelly: This is Chicago's Brexit. Sadiq Khan has no right to tell Americans to vote for Hillary Clinton for President

Mayor Rahm Emanuel will spend the day today with London Mayor Sadiq Khan, who last night addressed the Chicago Council on Global Affairs after an introduction by the Chicago mayor. Emanuel and Khan later visited the historic Green Mill jazz club Thursday night and Emanuel has a long list of events planned for Khan today.

Kelly has issued the following statement:

Today, London Mayor Sadiq Khan is making the rounds with the most unpopular mayor in Chicago's history - Mayor Rahm Emanuel. A mayor who has lied over and over again to the people of Chicago. A mayor who has allowed murder to become routine, who has allowed Chicago to become America's murder capital, and destroyed the city's financial future. A mayor that is one of Hillary Clinton's biggest fundraisers and supporters. How dare Mayor Khan come to our city and form this unholy alliance with Chicago's worst mayor. How dare he come to America's murder capital and tell us who to vote for. This is an insult to Chicagoans and Americans. This is Chicago's Brexit. The UK didn't listen to President Barack Obama when he told them to vote for REMAIN. And, we, the people of Chicago, will not listen to the likes of London Mayor Sadiq Khan, a foreigner to our city, a man who is not an American citizen, who does not have any standing, and who tells us to vote for Hillary Clinton. Khan didn't get the memo. Americans are a free people and will make our own decisions and choose our own destiny.

In POLITICO Illinois: "Sadiq Khan, the first Muslim to become mayor of London, made his preference in the U.S. presidential election clear on Thursday night, telling reporters after an event in Chicago that he hopes Hillary Clinton wins. Khan has verbally tangled with Donald Trump over the Republican's proposed ban on Muslims entering the United States. He added that he was 'a big fan of Hillary Clinton.'" http://politi.co/2crlPDT


William J.  Kelly is the midday host of "The Citizen Kelly Show" on AM 1590 WCGO and an Emmy award-winning producer. He is the founder of RevDigital, an independent TV and documentary production house. Kelly writes the "Chicago Rules" column for Newsmax and has contributed to the Huffington Post, American Spectator, Breitbart, and the Washington Times.